Last week: The SP500 index failed to move above the 2100 level in the early part of the week and later sold off. At the end, it closed with a net loss for the week, but near the level where it started April – a few points above the March closing price.

This week: The six-month favorable seasonality period has ended. The market is moving into the unfavorable season from May 1 to October 3. This is the first week of May and the old “Sell in May and go away” sentiment may reassert itself. But that doesn’t mean the index will tank. We could see buyers try to hold the index above the 2000 level. And sellers may try to hold the index below the 2100 level in an attempt to take control of the 2050 monthly pivot level. 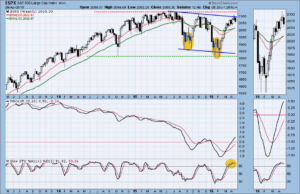 The S&P500 index hasn’t signaled any change in direction for the long or intermediate timeframes. The long-term trend remains up as long as the price stays above 2015.

But the short-term sentiment has been changed, and an overbought condition now encourages profit taking. At the same time external global uncertainty has also become a key issue for buyers.

The intermediate-term indicator (SST) also shows an overbought condition. So far the current short-term correction has not been completed. The decline could stop at the 2048 or 2020 area – or much lower if there is important news that triggers a sell-off.

To prevent a larger decline the index needs to stay above the 2000-1990 zone. Otherwise a major correction could lead the price back down to the bottom area of the rectangle pattern. 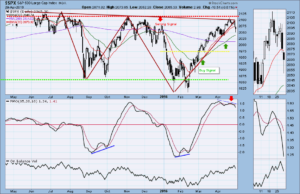 In the past few weeks the SPX has tried and failed to overcome the long-term resistance and the neckline resistance of the H&S pattern.

It approached its minimum expected target in the 2048.50 area, but the maximum expected area should be further down around 2015.

The short-term PMO has a sell signal and an overbought condition. Until the PMO indicator moves into oversold territory, the short-term outlook is bearish.

2082-2075 zone will be the key zone for this week. Failing to move above it will continue to encourage sellers and push the price down further in the short term. 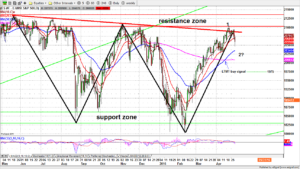 ES sold off Friday in reaction to the BoJ decision to not pursue more QE. It gapped down at the open and stayed under the prior day’s low for a lower close. It lost 13.50 points on Friday.

Today ES could retest Friday’s low in the early sessions. 2045-35 zone will be first level to watch.

As long as ES can hold this zone up, there is a chance the price will move back up to Friday’s high area for testing. If ES bounces first during overnight trading, but remains under the 2075 level, there is a great chance for the price to drop again in the following sessions.

The short-term is bearish. ES lost two daily momentum support levels (2077 and 2068) during Friday’s trading. Those two broken support lines will be today’s resistance lines. Any time the price approaches them, sellers are likely to show up.

2035 is the current support line. A break below it will be more bearish. Odds could push the price further down toward the next major support in the 2000-05 area in the coming days.