Last week: The new ECB stimulus promises and China’s rate cut ignited another rally. The index not only held above the 200-day moving average line, also successfully pushed the price above the four-year uptrend line, which had been the support line broken in the August crash. It gives the short term chart a bullish outlook again.

This week: The FOMC policy announcement will be on Wednesday. A small pullback move could be seen sometime this week due to the end of October shenanigans. The S&P500 index has already had a 210-point rally from the low at 1871. The upside move has some limits. A consolidation move should be expected soon. 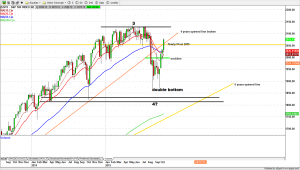 SP500 index did exactly what we predicted last week; it not only gave out a second buying signal, it also pushed the price above the four-year broken uptrend line for Friday’s closing.

Now all eyes will be on 2093 area to find a clue whether this rally will continue or not. Why 2093? Glad you asked:

First: Analysts are beginning to talk about bull market behavior in the context of a bear market, and that could be an accurate description of the current rally.

If it is, the 2093 area (the high from December) should hold the index down and push the price back into the 1950 area. That would help convince sellers that a H&S pattern is being formed which would lead to a continuation of the Bear. The 2093 level will be important for those who think we are in the early stages of a Bear Market.

Second: short-term swing traders will also watch the 2093 level because if is significant for Elliott Wave analysis. It will determine if the primary correction wave 4 is complete or not.

If is not, the index will start to retrace and continue performing the steps of a wave 4 pattern. There seems to be two viable choices for this potential wave 4: an ending-diagonal pattern (A-B-C-D-E) or A-B-C pattern.

Third: long term investors will also be deciding if they think the short-term will continue higher or not, especially as we move further into the favorable season for stocks. The rally has confirmed that the short-term low is in for this year, but that doesn’t guarantee the index will move higher if it can’t penetrate 2093.

If it does move above 2100, we’ll be watching for a move up to May’s high, or beyond, which will force us to consider the possibility of a primary wave 5 in the bull market.

So what happens next?

Fed policies have been propping the market up for several years; and this is so advantageous to the US these policies are likely to continue for as long as possible, whether or not there is a minimal Fed rate increase in December.

High US markets attract foreign investors, and the continuing money flows into the US support the US dollar and encourage the government to issue debt to finance both overseas adventures and the acquisition of resources on the cheap from foreign countries.

Rate cuts by foreign governments like China – and the subsequent decline in their currencies – accelerate the money flow.

US companies complain the high dollar hurts their overseas business; but the net benefit to the US means they probably won’t get much more than lip service from their government. 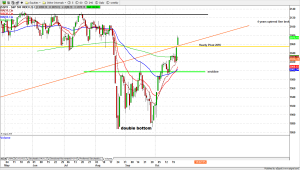 Both ECB and China contributed the latest two-day rally. S&P500 index not only moved above its yearly pivot level and confirmed that the1860 low had been posted, also it gave a second new buying signal for rest of this month.

There is a double bottom pattern on the daily chart. Its neckline is at the 2000 level, and it is also near the 50-day moving average line. Both 200- and 50-day moving averages will act as support and prevent the index from falling below them, at least for this week. Every dip or pullback will be bought by new buyers. 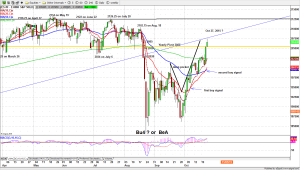 Last Friday there was a small “Sell the News” move after the market opened. The surprise rate cut from China pushed the ES to form a strong gap up in the pre-market session.

The ES successfully held the gain above the 2054 gap for closing on Friday, but the closing level at 2066 was right on the regular hour opening level, which formed an invisible doji pattern day — a gap up in the pre-market, followed by a 20-point doji in regular trading hours.

Today ES could repeat last Friday’s range move first in the early sessions. After the market opens, traders will focus on which direction the ES breaks. A move above 2079.50 could push the price up to 2088-89.50 area or higher up to 2094, the unfilled gap created on Aug. 18.

Short-term MACD indicator has some negative divergence with the price. A minor pullback in early sessions should be expected. But we will continue to see “Buy the Dip” behavior which could slow down the pullback.