Last week: The SP500 index had a second down week. But the decline stalled above the April- May breakout zone.

This week: This week is the expiration of major October monthly options. The index will attempt to move up or hold up price above the September low. However the CPI report this week may have some impact on the price. Several Fed members are speaking and the jawboning will help to move the market.

a) Medium and long-term 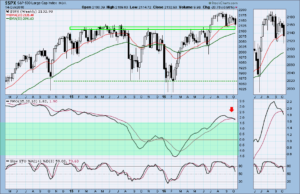 The intermediate-term overbought condition persuades some traders to take profits. The S&P 500 hit an ALL TIME high in August and has pulled back less than 3% from it.

It indicates that the Index is in corrective mode right now. For the long-term, the index remains in a uptrend as it consolidated above the April-May-June breakout zone.

Weekly PMO indicator has a selling signal, so does STO indicator. It suggests that the corrective move hasn’t completed yet. 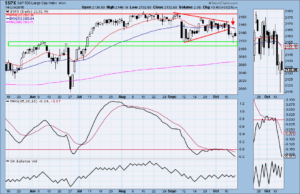 Up to now, the index remains within its 15-week rectangle pattern range (2190 to 2120) even thought the price broke down the smaller (and more recent) triangle pattern.

Breaking the triangle pattern makes the ultra-short-term and short-term outlook bearish, but not the long term, which remains bullish.

So far the index has stalled above September’s low, which was a breakout zone of the early half year and right now acts as a support.

Last Friday’s bounce faded by the end of day. The closing price was bearish. That keeps the index under the 20/40 ema lines and leaves open the possibility that September’s low could still be retested.

Due to the major option expirations this week, an early dip to retest last week’s low should be expected. As long as last week’s low or the 2100 level holds index up, a brief bounce could be seen.

But absent news affecting the market, 2175-85 will be a major resistance zone.

2106-2100 zone will be a support zone. A breach this support zone could give a more complicated correction. The index could go lower to the next major support zone around 2065-55.