Last week the SPX made a new intraday high at 2125.92 on Monday, then reversed and closed below the previous day’s low. As the week progressed weak economic data, especially the weak GDP report, contributed to the selling.

Once the equity index dropped below the 2014 high at 2093.35 selling programs were triggered. But the market rallied on Friday to recover 62% of the decline. It was a down week, but it did no real damage to the bull market.

This week the focus will be on a speech by the Fed Chair on Wednesday and the Non-Farm Payroll report on Friday. The Street expects US unemployment will continue edging lower, but the equities will continue to struggle for every new high. 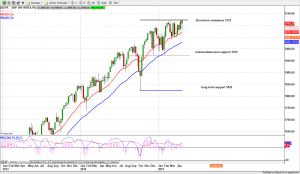 The S&P 500 index ended April at 2085.51, for a tiny 0.8% gain for the month. Even though the long-term trend remains up and strong, an overbought condition has been slowing the speed of the advance.

Now we are moving into the summer season and the usual “sell in May and go away” seasonal pattern may result in some adjustment of the long-term trend. We don’t expect too much selling from that adjustment. The intermediate-term support should be able to hold the index up even if there is a short-term correction.

SPX made an attempt to break the 2125 level last week. It failed but it is still able to try again. The long rectangular range from 2125 to 2040 has been established for three months. The longer the index holds in that range, the stronger the explosion when it finally breaks out.

There is still some time left in the favorable season for another break-out attempt. We have our CIT days at May 11 and May 26. However the room on the upside is also limited. 2168-78 could be the ceiling if the index does push through the top of the current sideways range and make a range breakout move.

From now to May 26 the yearly pivot zone 2055-45 is the key area. As long as any short-term pullback doesn’t break below that zone we will continue to see a struggle for more movement on the upside for a while. 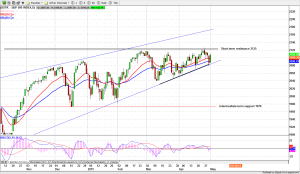 Last week SPX pulled back into the middle of the April range for the close of the month, then rallied up on the first day of May. The price has been kept inside the uprising wedge pattern. This rising wedge pattern gets more narrow and more narrow. A momentum breakout move could still occur this week or next.

Based on the daily chart, there is also a potential “W” pattern involved. The neckline overlaps the short-term resistances zone. A move above 2120 could lead SPX to try to break through 2125 resistance line again. A failure to break it could lead the price to drop back near last week’s low area 2075-80 again for testing.