Last week: a big surprise: Britain votes to leave the European Union. It wreaked havoc on the market. SP500 index lost 75 points, 3.5%, in a single day.

This week: After a big declining move, index has price imbalance condition. Two things may occur this week: going sideways for consolidation until index finds price equilibrium level; or continue declining until it hits its ground. Because this week is the end of the month, with a British and Canada holiday July 1 and a US holiday (July 4) the following Monday, we may see an early decline and later a day of bounce before the holiday. 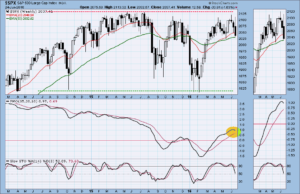 Even though the SP500 had 3.5% decline last Friday, the long-term market posture for the S&P500 is still bullish. So far the SP500 index hasn’t moved outside of its long-term consolidation range 2125 to 1825.

But as we pointed out last week there are three elements we are watching for the intermediate- and short-term outlook:

We are likely leading for some fake breakout and reversal moves.

The weekly PMO has topped and is making its way toward a negative crossover to give a selling signal.

The most bearish characteristic of the SP500 is the inability to breakout above the overhead resistance that has been formed since Spring 2105. Any break below 2030 level should bring big concern to the long- and intermediate-term buyers. 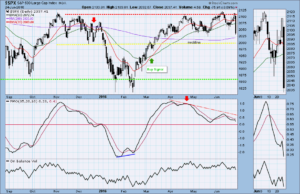 2072.75 and 2093 return as current resistance lines and possibly will hold index under them at the end of week if there is no big incentive injection news – think negative interest rates from the ECB – to hype the price.

Daily PMO was hit hard last Friday. It had started to rise on Thursday and instead it declined more on Friday, as did the OBV indicator. All this points out that the short-term outlook is bearish. Overbought conditions are still in force and more downside moves should be expected. 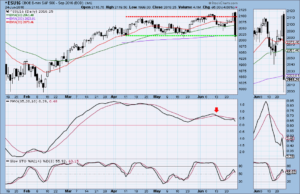 ES pulled the price back into the two-and-a-half monthly range (2100-2020) by posting a large gap down at the open on Friday, the reaction to the British vote to leave the EU.

However, even though it closed under the May low, it still hasn’t given a final confirmation that the monthly range was broken.

Based on the Daily chart, the PMO indicator almost turned up to give a buy signal on Thursday, but crashed down further to fail on Friday. It gives a bearish outlook in the short-term.

ES is likely to stay in the low range to fight for a move lower. Today 2065-75 is a major resistance zone. As long as price stays under it, sellers take control.

Buyers will have to spend lots of time to defend the 2000 psychological support. A break below 1995-90 could trigger selling stops and send the price lower toward 1985-75.