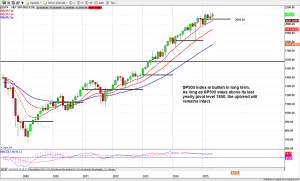 Last week the SP500 had a small pullback, but still managed to hold above the 2100 psychology support line. It was a short trading week and most of the economic reports showed the US economy is slowing down. Continuing uncertainty about the Fed’s plans for an interest rate hike influenced short-term decisions by investors.

This is the first week of June, historically the worst month of the year for US equities. Average returns for June for 10 and 20 year periods are negative, which is the source of the Wall Street jingle: “Sell in May and go away.” History doesn’t always repeat, and this June might be different. The employment report coming on Friday will give us some indication about the direction for this month.

Starting in June the US market could begin some kind of correction. We don’t expect too much; a 3% pullback should be a reasonable estimate. The correction may be brief – say one month – or it could last several months over the summer.

The long-term and intermediate-term indicators are all overbought. The yearly pivot 2055 will be a key line this month. We expect this pivot level area could hold up through the correction period, but a break below it could lead the index down into the bottom of the consolidation area or lower into major short-term support level (see Figure 1). 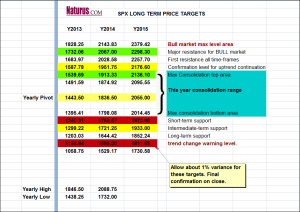 Our long-term outlook for the SPX indicates that as long as the index doesn’t go under the 1850 level, the major uptrend direction will not be changed.

The index has been advancing for two whole years (April 2013 to April 2015) since it broke through the yearly double top pattern. A consolidation or a sideways movement is overdue, and probably required in order for the index to continue moving up later.

It was a short week for the SPX due to the Memorial Day holiday. The index gave up the gain made in the pre-holiday week, and pulled back below the broken resistance level for the monthly close. The closing behavior was negative and traders may interpret it as a short-term selling signal.

Based on the daily chart there was a lack of upside momentum. After the index broke through the April high and made a new record high, it then failed to make the usual end-of-month adjustment. Now we are watching the options on the index for clues to the next direction.

The SPX options are showing larger-than-usual volumes and an unusually large range of strikes being bought. That suggests fund managers and institutional investors are unsure about the next direction and are hedging heavily in both directions.

This will make it more difficult for the index to advance. At the same time, we also should expect a wild whipsaw move for the short-term. The index can sell-off fast and quickly recover next day.