Last week the short-term uncertainty returned, based not on events in Greece but in China. The Chinese government announced figures for its gold holdings which many thought were deliberately low-balled, which raises the question: why?

In the US, a number of large-cap companies reported disappointing earnings, which got some investors wondering if the party is grinding to a halt. If China and the US are both losing ground, what would prevent a global recession?

This week we’re expecting higher volatility. There are some important economic reports, being released, more Q2 earnings reports to be digested, and the minutes of the Fed Open Market Committee meeting will be published. And it is the last week of July, with the usual end-of-month shenanigans.

The index could go easily go in either direction. We’ll be watching to see if the weekly and monthly closing price is under last two week’s low. That could confirm that the move to the downside is underway. 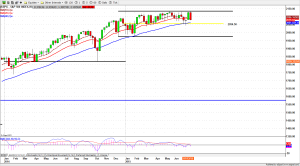 Last week the S&P500 index made new highs on Monday, but the strong upward momentum was disrupted by the earning reports from several blue chip companies. Later plummeting commodity prices and lackluster housing data also contributed to the decline.

We see 2015 as a consolidation year, with the consolidation range roughly established in the first two months. The price has wandered outside that range a little, but for several months all the price action has been contained between 2135 and 2035, and the market just thrashed around inside that range. As long as the index doesn’t break below this consolidation range, the long-term outlook favors the upside.

The problem, as usual, will be unpredictable external events. The strong US dollar will make US equity assets seem expensive and an economic slowdown in China will bring recession to many countries which rely on demand from China for raw materials. Commodity prices are generally weak.

So far the index hasn’t confirmed that a major top is in place, but market tops aren’t usually formed by straight up and down moves; often they form from a trading range formation that slowly separates the Bulls from the Bears. The process takes time. The index has made four major tops and three major bottoms in the last three months within the top half of the yearly range. We are entering an unfavorable period for equities, and the index could easily make a fourth bottom before the summer is out.

The index ($SPX) rallied for eight days; now it is possible for it to decline for eight days, back to the point where the rally began.

After it made high on Monday with low volume, the index lost its momentum again. In the absence of any real follow-through, the rectangle pattern traders may sell big contract (SPX) or ES mini contract, and push price down again. Last week when the index fell below the 2095 level, it triggered momentum selling. Friday’s selling was bearish. There is a good chance for the index to go back down again.

This week we have the FOMC announcement on Wednesday. The index may go down a little further on Monday and bounce from the low to wait for the Fed rate announcement. This time the Street still expects the Fed will not raise interest rates, but there will be intense focus on the Fed statement, and much parsing of the language. For the end of the month, the index will likely struggle to close above the support level around 2055. 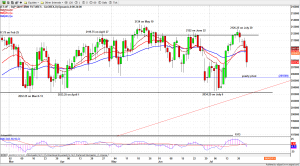 ES had a strong selling day on Friday, pushed down by poor housing data and plummeting commodity prices. The close near the bottom of the day and below the moving averages leads us to believe the summer rally is over.

The short-term is oversold after Friday’s decline. Today ES could bounce from Friday’s low area if overnight trading manages to hold above that level. If price goes up first without testing the 2069.75 line in overnight trading, the ES is likely to drop back down again in regular trading hours. The ES could also make new lows under the 2069.75 line.

2069 is the first unfilled gap below the current price. There are two more unfilled gaps at 2041.25 and 2039.25. The 2090.50-88.75 area will be the first major resistance today. As long as this resistance zone prevents the ES from advancing, those unfilled gaps are likely to be the targets for the next downside move.