Last week the curtain finally fell on the Greek debt drama and the Fed re-asserted its intention to raise rates – maybe, if nothing goes wrong – in September. The Chinese market found short-term support thanks to extensive government support, and managed to stop the bleeding. Everything is wonderful in its own way, and the US market rallied again.

This week we have a heavy batch of earnings reports, but fewer economic reports. Better earnings from the Blue Chips could push the US market to new highs. This summer rally behavior could continue until Aug. 6. 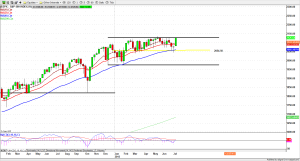 The SP500 index finally got past the Greek debt crisis and the Chinese market crash. It regained and held its yearly pivot level well after a short-term correction. Now it returns to the top level of the range defined in the past several months and gets ready to attempt to make new highs.

This time the index moves into the short-term bullish four-week cycle. It has to make new highs to keep the rally alive before the price drops again. So far the long-term uptrend remains bullish. The intermediate-term indicators are neutral and will continue to support the index. The short-term has an overbought condition, but we expect this overbought condition will solve itself by a brief pullback. 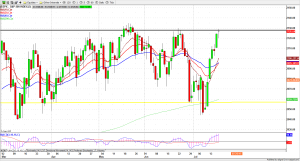 The index ($SPX) had a seven-day rally and closed at last month’s high area on Friday. The price action was bullish early in the week, but on Friday it showed a little sign of exhaustion by forming a doji with a relatively narrow range.

This week could have a brief pullback, but this pullback will not last very long. The 2100 level will be a major support. The short-term buying signal will likely bring more buyers into this market even if the index has a short-term pullback. The beginning point of the current rally is about 2080. As long as the price doesn’t close below that level the short-term trend is up. Buying the short-term dips will likely continue this week.

Here is the member content for the week of July 20. Download the full trading plan here: 150720-plan 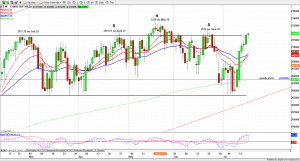 ES had a narrow range day (NR7) last Friday. The current rally temporarily runs out of energy. Today we could see a range expansion move, perhaps with the price going up to 2127.25 first and then down 2105.50 later if the overnight trading holds above the 2112.75 level. If the overnight trading fails to hold, and drops below 2110.75, we could see the price drop to 2105.50 first and go up later.