Last week: The movement last week was characterized by high volatility with large swings in both directions, caused not by market internals but by external events. The news disrupted the expected market movement, but despite the volatility the market ended the week where it began.

This week: The economic reports scheduled for this week are relatively light and not market movers. This is also rollover week, when futures traders move to a new contract (March 2016). Usually that makes the price action choppy, and volatility higher. We may see the market move up first, then decline later in the week. As always, the News flow can change everything in an instant. 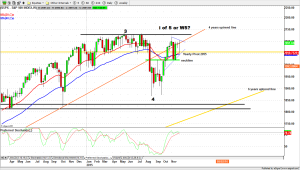 For the Thanksgiving holiday week the ES made a narrow range; last week we saw a range expansion in an unsettled market disrupted by external events: the California shootings, followed by the European Central Bank first disappointing traders with a weak stimulus package, then changing course – or at least their talking points – in a subsequent press conference.

On Friday a good Non-Farm Payrolls report — the second good month in a row – has investors thinking “lift-off” for the US economy is just around the corner. The favorable seasonality (think Santa Claus rally) is helping and may push the index higher into the end of the year.

The volatility didn’t damage the long-term and intermediate-term up-trends, which are still firmly in place. The long-term analysis we published last week (available here) is still valid. The key points to watch are the four-year uptrend line, currently around 2095.50, and the full-move target for the break-out from the double bottom (see weekly chart) around 2154-62.

We are also watching a pennant pattern forming on both the long- and short-term chart (blue lines). Normally this is a bullish pattern, but we want to see a break-out from the upper boundary soon.

However there is also the possibility of a breakdown from this level. So far in 2015 the market has made a long topping pattern roughly between 2100 and 2120, then broken down dramatically in August, only to recover most – but not all – of the loss in November.

Now we are sitting at the point where the market must move up if the long bull is going to continue. If it doesn’t, the pattern that will be formed will look a lot like the pattern that often marks the end of a bull: a sharp decline, followed by an equally sharp recovery that stalls at the uptrend line, then drops sharply to much lower levels.

The last time the ECB announced a stimulus plan the bounce lasted for about five months. If the current version can’t move the market up (or at least stop it from falling) for at least two months, we may have seen the top.

There is also the question of an interest rate increase in December. The Fed seems determined to go ahead with this, and a majority of market participants think it will happen. If there is a rate hike it may have less effect on the Index than usual; a lot of traders have already priced it in. 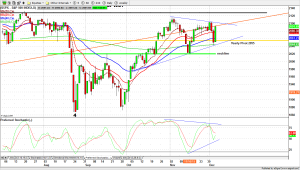 The price action on the SPX last week was strong. The quick recovery from the decline early in the week indicates buying strength. That will encourage the Bulls and tempt buyers to move in on every dip.

The same triangle pattern we see on the weekly chart is in play on the daily chart as well. For the short term we are watching for an upside break-out that carries past last week’s high.

If we do not get the break-out the market is likely to stay within the triangle. But in any case we expect the buyers to come in on the dips, and to stall any substantial retracement. Nobody wants to bet against Santa Claus. 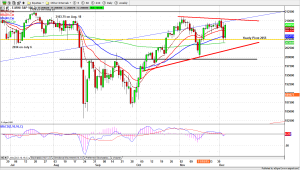 Last week the ES demonstrated a strong recovery from the sharp losses early in the week. It indicates the buyers have no fear of a retracement, and are willing to jump on every pullback as an opportunity to get in at a better price.

The good Non-Farm Payroll and the ECB’s willingness to strengthen what was seen as weak support for more QE turned the market around, squeezing the shorts and sending the price back to roughly the same level as the beginning of the week forming a doji pattern.

A bullish engulfing candle on Friday could carry the price further up in today’s early session. Any pullback in the early sessions is likely to be bought by oversea shorts covering.

The 200-day sma at 2065 area is first major support level. We should see the buyers there.