The week started with a sharp sell-off on Monday at the open, sparked by a rout on the Chinese stock market. The Shanghai index closed down 8.5% for its biggest one-day drop since Feb. 2007. But the SPX managed to hold above the 200-day moving average line and immediately reversed to the upside to close above the previous week’s closing.

This week: the SPX may continue to go sideways with some modest gains, but it will likely remain within the same large sideways range, with 2135 on the upside and 2035 on the downside. The ADP private employment report will be released on Wednesday and Non-farm payroll on Friday. Both reports will be used by the Street to guess at the Fed’s next pass at increasing interest rates, which seems to be the only thing the market worries about now. 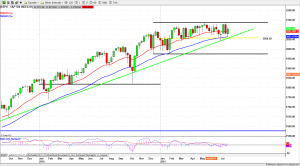 The S&P500 index closed up 2.1% for July. The price closed well above all its intermediate-term momentum lines (20/40 ema) to continue giving a bullish outlook. In the past 30 trading days the index declined right to its 200-day moving average line and reversed off it many times. That line has become critical support now. The higher lows made last month are also  a bullish indicator.

Eventually the long sideways range that has contained prices all this year will be broken, either by a long term decline or a long term advance.

For a long-term advance, the index has to break out from the 2135 line to move toward the 2200 target. We have posted the long-term destination targets many times. As long as the index doesn’t close below this year’s live pivot at 2055, the long-term upside targets will not change after the breakout occurs.

For a long-term decline, the Bears have to fight through many support lines below the current price, which may be difficult. It is difficult to change the direction of an uptrend of such long duration, especially while the $VIX index refuses to move back above 15.

August is typically a time of seasonal weakness. Many traders will take their vacations until after Labor Day. The volatility will be high, and thin volume could make the price movement more choppy. So far price action is strong, and the market sentiment is still bullish, but the $VIX is at historic lows and the market breadth-advance/decline line is making news lows and lower highs. That is not the right condition for a bullish breakout. Therefore we suggest our traders either take a vacation or trade short-term moves in August until the big players return after Labor day. August may be a good month for the beach. 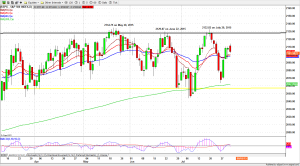 There is a sideways range from 2130 to 2040 which has been well-defined since March. Now the 200-day moving average line has become a critical support line for this week.

The market may continue sideways this week. The resistance line at 2135 and support line at 2040 identify a sideways trading pattern. Both lines are marked as “breakout” or “breakdown” levels. The index has been unable to break out to either the upside or the downside of this range since March, which is a very long time for a consolidation market.

At some point this range will be broken. The question is: When?. Right now there are many mixed signals from the major indices which don’t confirm each other. It is hard to predict when or in which direction the SPX will go next. We can only follow the short-term trends until a true breakout (or breakdown) occurs.

On Friday the ES ran up in the pre-market and opened the day session at a high level then dropped back to close at the low of the regular hours trading range. It formed a relatively long tail candle pattern. Below it there are 3 momentum lines (10-20-40ema lines) creating a key zone for today’s trading.

The short-term indicators are neutral. But all short time-frames are getting overbought again. Today ES could bounce from the overnight low area if overnight trading manages to hold up 2086.50. If the price goes up first without testing the 2093.75 line, ES may reach 2106-10 zone in the early sessions, but is likely to drop back down again in the regular trading sessions.