Last week: The seasonal weakness finally arrived in the US stock market. The three major indexes all crashed more than 5% for the week.

This week: Sentiment has changed to extremely bearish. This bearishness could carry on and drag the markets down further. The Dow-Jones industrial average ($INDU) has now entered a Bear market after the 50-day moving average line crossed below the 200-day moving average line. SP500 hasn’t seen that cross yet, but the first sell signal was given when the fast moving average (10ema) crossed under the 200-ema in the short time-frame. It indicates that the Bears are in the driver’s seat. 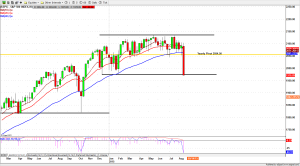 Even though the long-term direction wasn’t changed by last week’s panic selling, the intermediate-term momentum indicators have given a first selling signal and declare the beginning of an intermediate-term correction.

How far down should the index go? That will depend on external events: a Chinese recession; further declines in oil and commodities; currency devaluations; the Fed’s decision to either raise rates of start a new QE. But we can estimate some levels here the index may stop for a retracement when the selling gets exhausted.

First, the index broke the three-month sideways range at 2039, and confirmed that 2134.72 is the short-term top. The breakdown movement should head toward the 1944 area, which is below the 2015 January low around 1980. The price needs to hit 1944 and quickly move back above 1980 to end the current declining move.

Third, this bull has run up for almost 6.5 years, and a 20-40% intermediate-term correction should be expected if the global economy and the US economy continue to show signs or slow or deteriorating growth.

The first three-and-a-half years of the bull market was a consequence of the Fed’s QE program. If that is deducted, the real starting point for the current bull market is around the 1575-1585 zone, which is a 38% retracement of the move from the March 2099 low at 666 to the top at 2134.72. Traders should be aware that the market will often return to retest its starting point. 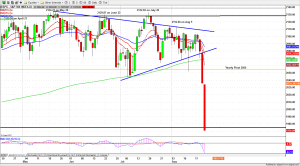 The S&P500 index not only broke its 200-day moving average line decisively, also it broke the solid support of the three-month sideways range at the 2030 level. The breakdown movement acts like a double-edged knife, that directly weakened the bull, and proclaimed the start of the intermediate-term correction.

Now the yearly pivot at the 2055 level area will become a major resistance area. Any bounce that does not break through that level will be sold and attract new sellers. Unless the Fed launches a new QE4, the short-term and intermediate-term will remain down for a while. Until the intermediate-term correction is over, any short-term bounce will be limited and shouldn’t last very long.

Monday could be the fifth day of declining if the SPX can’t move above the 2000 level. The price could go down further to search for support, with a small bounce later — perhaps a one or two day bounce later in the week. But any bounce shouldn’t change the short-term downside direction. Traders should continue focusing on the short side if there is a return to major resistance lines in the early part of the week. 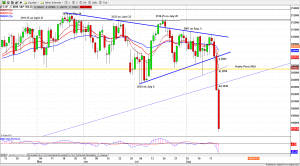 Last Friday ES triggered a major momentum sell-off by a break through the lower bound of the three-month sideways range. The full measurement for that movement should be around the 1930.50 area, which is still 38 points away from the current level. Over the weekend there may be margin calls that could lead to continuation selling in early trading today.

The volume was extremely high last Friday, and price action was extremely bearish. Today could be the fifth declining day before the price bounces. ES will search for support below 1960 level and try to bounce. But any early bounce is likely to slide away back down again.

A small bounce is likely. But on any bounce up to those chart resistance lines (the 20/40 ema lines) we could see scalping short players showing up.