Last week the sudden currency devaluation by China sparked a sell-off in the US markets. The ES was down 1.6% intraday on Wednesday. It broke well below the 200-day moving average line and triggered selling, but at the end the index erased the loss and managed to close with a gain for the week. 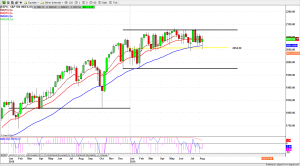 The long-term and intermediate-term outlook has not changed very much. The index remains inside its upward (2135-2050) consolidation range.

Last week Fed members sent a mixed comment on the September interest rate hike. In our view it really doesn’t matter too much whether interest rates rise or not in September. Any rate increase will be small, and mainly symbolic so far as the long-term outlook is concerned. The long time-frame could remain bullish for quite a while.

Unexpected external events may cause the price to make big swings in both directions, but that will only affect the short-term outlook. 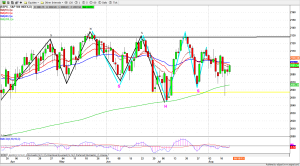 The S&P500 index broke its 200-day moving average line in intraday trading last week, but later the price rallied and erased the loss; it closed the day with a gain.

Last week’s low could the low point point in the current correction. If this analysis is correct, we should expect higher highs over the coming days and weeks and possibly another attempt at the bull market highs.

The 200-day average line held in corrective moves in early July as well as later in July. Rach of those corrective moves was followed by a rally off the lows. Last week’s move looks pretty similar to those retracements.

This week we may see the index retest the 200-day moving average line once if the price fails to move above the 2100 level. But as long as the index doesn’t close under 2065 level for the week, the short-term movement still favors the upside. We will be looking for a real change in direction only if the index breaks below the 200-day moving average line and closes below it. In that case the market bias will shift to the downside. 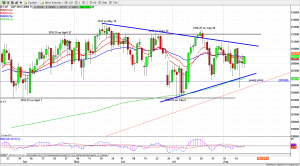 Last Friday ES had an inside day move, but closed at the top of the trading range with lower total volume. The price action was bullish for today. Thin volume could be enough to win if the ES can hold up 2080-75 zone during overnight trading.

A potential triangle pattern within the up-channel of the broad consolidation range could continue to restrict the ES. However a break above 2110 level could push ES back up to the July high.

Conversely, a move below 2055 could cause ES to drop to 2050-45 zone to retest last week’s low. I don’t expect this will happen, but external events are unpredictable. Nevertheless we should be watching for weakness and downward price moves for long enries, and then continue to focus on the buying side.