Last week neither the ADP private payrolls nor the Non-farm payrolls reports met their expected numbers. Both were below the low estimate. The fear of a slowing US economy and of a possible rate hike in September drove all the major indices down to anticipate possibly poor future outcomes.

This is the week before the major August option expiration (Friday Aug. 22). SPX may continue to go down to make lows on Thursday or Friday of this week but the price may remain inside the monthly sideways range from 2135 to 2035. 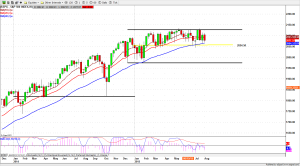 The S&P500 index has been rising since 2009. The index already went from a low at 666.79 in 2009 to high at 2134.75 on May 20, 2015. That is almost a 220% gain in six years. In addition the index hasn’t had 10% correction since October 2011. The question concerning investors and traders alike is the likely next step: a continuation of the bull run, or a short-term correction? That issue will continue to influence the Street’s behavior in the next few months.

However we can identify some landmarks that will help is identify if or when the market begins to reverse.

First, the long-term bull market can be regarded as continuing until the index breaks 1800 on the way down. For us, that will be the confirmation of a change in the direction of the long-term trend. Something less than that should be regarded as a correction, not a reversal.

Second, in the 2040 to 1800 range – i.e. Between the present price and the change-in-trend marker – there are intermediate-term and short-term support levels that will provide confirmation/non-confirmation that the market is changing direction. We identify these levels as they are approached.

Third, money flows will help us identify possible changes in the trend, and make decisions about what comes next. For example, the Chinese equities market dropped sharply in the past two months, but the crash didn’t stop the flow of Chinese money into US equities – in fact it may have accelerated it. The US is still seen as a safe haven and money flows from other markets may help to support the long-term uptrend.

Since the beginning of 2015 we have been saying that this will be a year of consolidation. The expected consolidation range is from 2136 to 1970.

That doesn’t mean 1970 won’t be tested in coming months. The index has made five tops but failed to break above the 2136 line in seven months; this kind of behavior is often seen at market tops, and could be followed by short-term and intermediate-term profit taking.

In August we often see seasonal weakness. The 2055-2050 zone will be critical for August and September and there could be price choppiness or whipsaws around this level, with a strong buy movement for one or two days
followed by strong selling on the following days. As traders, no matter what the long-term trend is doing we still need to pay attention to the short-term movements. 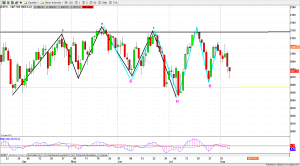 So far the S&P500 index continues inside its sideways range from 2130 to 2040 even though we saw the some selling pressure at the end of the first two quarters. Time is moving into the worst season – August and September. The 200-day moving average line has become a critical support line.

But no matter what pattern the index forms, the price has been contained within the intermediate-term rectangle. Depending on the next move, this could turn out to be either a distribution or an accumulation behavior in the long-term trend. Only a monthly close above or below the rectangle zone resistance or support can confirm the long term direction.

Last week selling threatened the recent bullish inverted H&S pattern. The 2055 line could become a whipsaw line. The index may break it in the early week and push back above it later in the week if 2040 continues to hold up. 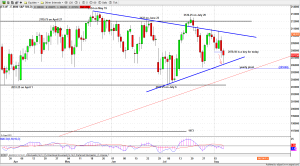 Last Friday ES had a follow-through move from its prior day’s decline. Because of weekly option expiration day, ES managed to hold above the short-term uptrend line for closing. But the closing price still was under 2078.50, last Friday’s key line, which gave us the impression that the ES could still retest last Friday’s low or go lower.

Today we have Atlanta Fed president Dennis Lockhart speaking at 9 am. There is no economic report. Overnight trading could push ES up to 2083.25-82.75 zone to bail out buyers trapped in Friday’s morning session. But a failure to move above 2078.50 could lead ES back down again to retest Friday’s low 2062.50-64.00 area. A break below 2059.50 could run the stop sell orders and push price toward 2055-50 zone to challenge the long-term support line (the 200-day moving average).

The ultra-short-term indicators are moving into oversold territory, but not at extreme levels. The short-term momentum indicators have been flipping from buy to sell to buy to sell in the past four days. That is a struggle behavior. Today the 2055-50 zone will be very important for the short term. A break will lead the ES close to the July low.