Last week: SP500 index made a new record high on Friday after spending most of the week in a sideways consolidation but fell back into the close. It had little reaction to the FOMC announcement Wednesday. The consolidation has lasted about two weeks and is beginning to look tired; what started as a pause in the rally is turning into a vacation.

This week: For the first week of August we may see an attempt to move higher in the early days. If it fails to move to new highs, there is a chance for a minor pullback to the 2135 area for testing. 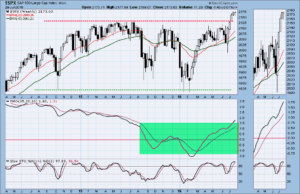 The SP500 has held the price up well since it broke the long-term resistance at 2135. The signs for the long-term are bullish. The uptrend remains intact.

The index may stay quiet for an extended period of time. But it could also follow the same pattern as last year: a high made in August, a retracement in September and a second rally in October.

This year is the presidential election year, and we may see something similar: highs in August, a retracement in September and then a roaring rally as the election approaches. That is a familiar pattern in the fourth year of the election cycle. 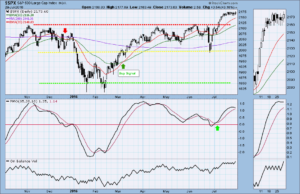 We have seen 12 days of consolidation trades, as the Index attempted to smooth out the short-term overbought condition.

Daily PMO indicator tried to move down in last two days, but it was not successful. Nevertheless, a minor pullback can’t be avoided.

2150 in the first support line and 2135 is the major support, which we expect will be held up this week.

This section contains the detailed buy/sell levels foe tomorrow and the rest of the week. It is reserved for paid subscribers.