Last week: The S&P 500 index erased all the prior rally. The concerns about breadth not keeping pace with gains and a bearish divergence between small caps and big caps increased. The collapse in the price of oil all contributed to the big selling on US stock markets in advance of the Fed interest rate announcement this week.

This week: We may see a small bounce if 2000 level holds before the Fed announcement. But the bounce will not change the short-term downtrend direction. Volatility will be high. A big swing move should be expected this week. 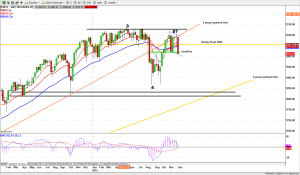 When everyone was expecting the normal Santa rally, as usual the market produced unexpected results. The Index gave up November’s gain last Friday with a substantial loss. As of Friday’s close the index is down 2.8% for the year.

Even though the index hasn’t done too much damage to the long-term and intermediate-term chart, the short-term was lots worse than most people expected.

First, the price remains in a broad consolidation range from 2135 to 1830 for the year. Right now the index is sitting near the middle of that consolidation range. If index fails to hold above the 1975 level, it could fall to the lower side of that range again.

Second, the primary wave 5 top hasn’t been confirmed yet. If the index fall into the 1830-50 zone and closes below it, we will have a final confirmation of the end of the current bull market. For a continuation of bullish market, the index needs to hold above the 1930 level to avoid triggering a bear market price move.

This year only has three weeks left. We may not see a Santa Rally. Even it does arrive, the price will not go up very much until next year. 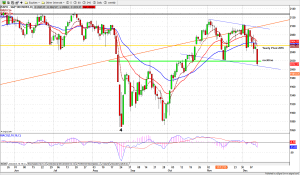 Now the index has dropped below 2033 and given a bearish outlook again. There is a psychological support area around 2000, and a positive seasonal bias that may hold the index up for the rest of the year. Or not. In the longer term we still could see the price drop down further to retest 1830.

This week a brief bounce could be seen, but the bounce will not live very long, especially with the quadruple witching this week.

2055-65 will be a major resistance level. The first support will be 1975 and second support is lying at 1950-35. All eyes will focus on the Fed, and the policy decision could easily cause a big swing ion the index. 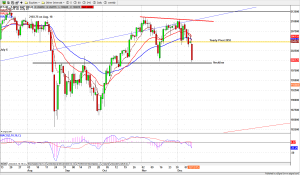 Last week the ES pulled back into the neckline of the double top pattern. The heavy selling was related to the sharp decline in oil prices, which reached the lowest prices in six years. Now this neckline will be the mean line of a broad yearly consolidation range. ES has to make its decision this week. So far there are both a double top and a double bottom pattern. ES closed right on the neckline.

Sorry. This content contains the detailed buy/sell instructions for next week, and it is reserved for paid members. You can join here for as little as $9 per month, and get instant access.