Last week the index sold off on Wednesday after the Fed Chair commented that stocks are “overvalued,” but quickly found support and advanced the following day, and moved even higher in a broad-based rally Friday. But at the end, the index is still within its trading range from 2125 to 2040.

This week there are relatively few major economic reports to be released, and the index could extend its rally from last week. The question is if the Bulls can break through the overhead resistance lines, or conversely if the Bears can find a reason to move it back down into the trading range. Monday’s price movement should give some hint about the direction of the next move. 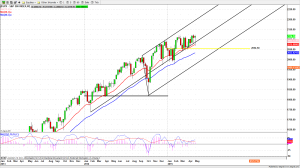 The S&P 500 index has made a series of short-term whipsaws, mainly because traders are trying to guess the intentions of the Fed, process the news from foreign markets and make sense of the international financial situation. All very confusing. However, for the long term the situation is clear: the uptrend is intact and remains strong.

The long-term chart speaks itself. Since the index made that historic low at 666.74 in 2009, the Fed has injected huge quantities of free money, especially in the three following years (2010, 2011 and 2012). By April, 2013, the index had fully recovered the loss incurred in 2009. The US financial crisis was ended, and the real bull market started.

The basis point for this bull market is around the 1570 level. The current target, 2136.50, is just a point where we should expect some profit-taking. The final destination for this bull should be in the 2485 area, and it may take us another year or more to get there.

The range from 2125 to 2040 level could be treated as a rest stop for the long-term bull market, a point where the investors who entered around 1570, 1770 and 1850 level over the past two years will lock in partial profits.

Their selling is likely to be covered by laggards who were late to the party and are now hoping their recent purchases will carry through to the final destination. That rotation is one reason the market is able to continue rising without breaking out of the up-trend channel.

Until a breakout from the current level is confirmed, any move within this range will be intraday noise. The yearly pivot zone 2055-45 is the key zone. As long as a short-term pullback doesn’t break it, the buyers will continue to show up. The longer the index holds in that range, the stronger the explosion later. 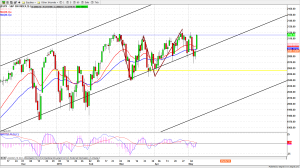 Last week SPX sold off in the early days of the week and bounced strong on the last two days. The price action was strong. If there is a follow-through on Monday it should take the index to new highs.