Last week: The Fed interest rate increase, announced on Wednesday afternoon, became a convenient excuse for a retracement that had been brewing all week. The “Trump rally” had been running out of steam and the Fed provided a reason to pause. The very short time-frame remains overbought, but the market is holding above the important support around 2250 and closed above it.

This week: This is the week before the Christmas holiday, and we are likely to see lighter volume and increased volatility. We’re watching for unpredictable swings. We could see a little more profit-taking holding back the Bulls. The short-term is overbought, but the seasonal bias is favorable for stocks, which may give us a sideways shuffle into the holiday. Any rally will be small.

a) Long and medium time frame 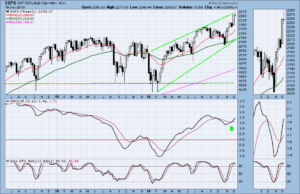 Long term remains bullish with no change in the outlook, despite the consolidation last week. The long-term trend remains intact as long as the index remains above 2200. The upside targets we defined in last week’s post remain unchanged.

There is likely to be some pull-back, but not enough to disrupt the long-term trend. We are not expecting a sell-off large enough to change the trend before the end of the year. And I don’t expect to see the SPX at 1000 again in this lifetime. 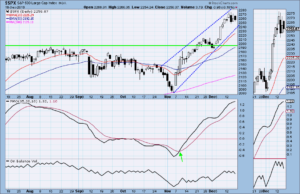 The weekly chart has formed a doji last week, and the daily chart is developing a pennant pattern, with lower highs and higher lows in the last few days of the week. Both signal a possible pull-back, or at least a pause in the rally that has been running since the presidential election.

In this pre-holiday week we may see a retracement in the first couple of days, followed by a Christmas rally into the holiday. The seasonal bias is favorable this week.

We may also see a continuation of last week’s consolidation range, with the market remaining inside the 2275-2245 channel.

However the index needs to hold above 2240, especially on a closing basis. A close below that price could be the precursor of a larger move down. The short-term is overbought, and a larger retracement, followed by a bounce, is possible, if not this week then soon. The Trump rally is nearing the end.