Last week: “Thin to Win” brought lots of ultra-short time players into the market. The market had an oversold bounce, and recovered most of the loss made in the prior week.

This week: the final week for year 2015. We still can see a movement similar to last week. – run up first and sell in later two days – if there is no external news involved. The Index will try to hold up for a positive closing for the year. But it is not certain that will happen. 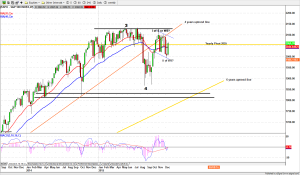 There are only three and half trading days left for this year. The six-year long-term uptrend has been strong and bullish since index made its low in 2009. It hasn’t been touched for four years after the correction made in 2011.

The four-year uptrend line was broken in August this year. Since then this broken uptrend turns into a resistance line, and continues preventing the index from moving above it.

The index made a high around the 2135 area in May and kept making lower highs in the following months. The price has been forming a round top with multiple shoulders. The key support line could be lying around 1850, the six-year uptrend line. This support could be retested sometime in the future.

Right now we don’t know where the actual yearly closing price will be. We expect the yearly doji pattern will be formed to give out a reversal signal for the long-term price move at the last day of 2015. 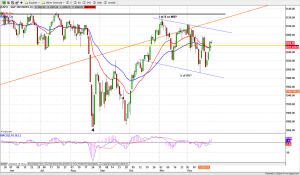 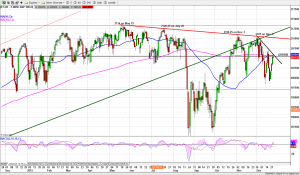 Last Thursday ES gapped up at open and made a high at 2059.75 with very light volume. But before the market closed, ES sold off quickly and gave up all the gain. That was a typical holiday move: pump the price in early trading, but traders didn’t want to be holding positions over the holiday.

Today ES could repeat last Thursday’s range if there is no important external news to generate a big price swing. There is an ultra-short-term downtrend line on the daily chart. So far that downtrend line overlaps the 50- and 200-day moving average lines and acts as a resistance zone from 2055-60. As long as ES doesn’t go above that zone, odds favor a retracement back down to the December low area.