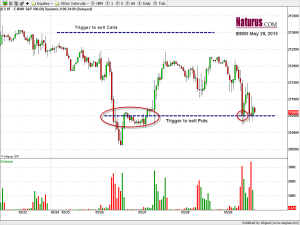 The economic reports released last week were almost uniformly bad. The macro data does not suggest any significant recovery, but it also doesn’t show inflation or a deteriorating jobs outlook, the two main concerns of the Fed.

That may be all the reassurance the Fed needs to raise rates. After all, they have to do it sometime, and the conditions will never be perfect. And while the Fed continues to stall on the when, they insist that rates will increase … at some point.

The uncertainty is haunting US equities, and we saw the results in last week’s back and forth movement: after the previous week’s all-time high, a pullback (later recovered) below the psychologically-important 2100 level.

The movement was helpful for our option trades. We were able to sell 2080 Puts and 2070 Puts early in the week after Nat’s trigger point at 2105 was hit. We had a second opportunity to sell more in early trading Friday, but it was too close to expiration to make the trade attractive. All of our options expired OTM and we retained the entire premium.

This is the first week of June, traditionally the worst month of the year for US equities, and the US market is overdue for a correction. We could see a little hangover selling from May ahead of the Fed’s June meeting.

The Greek debt issue (a default seems likely eventually, if not immediately) and massive stimulus from the Eurozone, Japan and China also affect the US markets. The Fed has successfully held rates down for a quite long time, but US economy still hasn’t improved as much as Fed expects. The markets are a little skittish.

The Street hopes to see the Fed confirm the date for a rate increase, if any, during the June FOMC meeting, but we don’t think it will happen. The uncertainty may produce a minor pullback this week. But every pullback will be quickly bought. In other words, the decline will not be violent.

2110 is the option mean line this week. The 2150-60 strike price calls were brought last week, and indicate that zone should act a ceiling for this week. ES could run up to 2150 area if there is a strong momentum run through 2135 level. Our system shows that ES shouldn’t close above 2175 level this week, therefore, we could look for selling Calls at the strike prices in the table below if ES rallies up to near 2125 level.

Puts with strikes below 2100 were also largely bought. That indicates lots of hedge activities going on this week. Our system shows that ES shouldn’t close below 2010 this week. Therefore, we could look for selling Puts if ES drops below the 2095 level.

Nat’s option trades for this week