The S&P 500 cash index ($SPX) closed at 2076.72 last Friday, down a few decimal points but essentially unchanged in a week marked by dramatic events.

Last week the combination of Greek Drama and Chinese saga all arrived at the same time. They not only caused their own markets to crash, they also brought the roller coaster to other markets around the world.

In the US the large-cap market was driven down by heavy selling at the beginning of the week, but bounced back at the end based on hope – that the Chinese central government’s interventions would stop the decline in Shanghai, and that Greece might find some way to reach agreement with its creditors,

This week is July option expiration week. The option expiration, usual an event that increases volatility, will be accompanied by a heavy schedule of economic reports and the beginning of the earning season. Volatility will remain high and traders will continue to experience frustration until the market settles itself down. 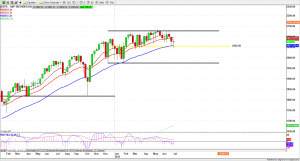 In the past two weeks, the financial world focused first on Greece, then on China, then back to Greece again. Just as the idea that maybe Greece would leave the Euro began to be accepted as a real possibility, the thundering stock market crash in China – down 50% in three weeks – became the center of attention. Both drove the global markets down sharply, including US markets.

But things in China changed quickly as soon as the central government became involved and announced strong measures to keep markets from selling off. The government injected liquidity, halted trading in a large number of stocks, and ordered 21 securities brokerages to put 15% of their net assets into a fund to prop the market up. The Chinese stock market rebounded, at least temporarily, which helped the SP500 index climb back up to its intermediate-term neutral area.

In Greece thing are much less clear-cut. The financial minister resigned or was fired, and negotiations resumed over the weekend. So far they do not look encouraging.

External events didn’t change the long-term outlook for the US market. The long-term trend remains bullish. The intermediate-term may hold up the index as we wait for the short-term oversold condition to be fully resolved.

We expect this year is a consolidation year, and 2135 to 1975 should be a reasonable range for it. 2055 is a yearly pivot line, which will act as a magnet for that range. Right now half of 2015 has already passed, and we are watching to see if the index can hold above its pivot line for the rest of year. That issue is still in doubt. 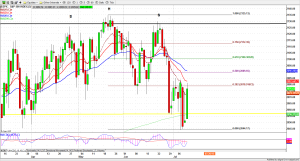 After a wild week, the index ($SPX) closed high enough on Friday to hold its 200-day average line. Last Thursday’s low should be the low of this week if there is no external event to disrupt its movement.

The yearly pivot level and 200-day moving average line overlap each other and they should act as a support zone to hold up the index until the monthly index option expires on Thursday. The only problem may be the volume; light volume usually won’t support any further price rally. The short-term trend will be still down unless the index manages to close above 2110 level on weekly basis to change its direction.

Here is the member content for July 13. Download the full trading plan with the buy/sell numbers here: 150713-plan 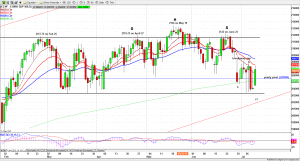 ES had a big bounce on Friday, reacting to the possibility – however weak – that Greece may be able to stay in the Eurozone. So far it was a bounce based only on optimism. It hasn’t changed the current downside trend direction yet.

The 2050-55 zone – the yearly pivot and the 200-day moving average line – constitutes a support zone. Even though ES broke this zone last week, the bulls manage to push the price back above this level for closing. The range pattern buyers will continue to show up at the bottom of the rectangle pattern and to help holding ES up if the 2030-35 level is not breached today. 2085-88 will be first resistance zone for today. A move above it will be bullish. The 2095.50 unfilled gap will become the next upside target.