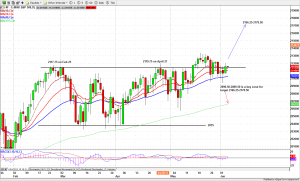 ES spent most of the day trying to push the price above the 2119.25 line. So far the Bears defended 2119.25 level well. At the same time, the Bulls also defended their support level at 2107 well yesterday. Both side are tired.

The narrow range move could frustrate many traders. It is possible for investors to wait for the employment report on Friday before they roll over their positions again. ES remains in its consolidation range, but it could run up toward 2135-33 slowly if 2125.50 line fails to hold ES down today. But it also could drop back down later after it runs up. Lack of buyers is a major problem for the season. It could take time to complete the consolidation process.

The Jobless report will be released in the pre-market. Most are still waiting for tomorrow’s employment report. Friday June 6 , 2008, was a big sell off day after the employment report. Can it repeat this time? It may. We already saw some big players on the selling side during yesterday’s intraday trading.