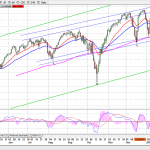 It was a strange night and a strange day. Overnight the Swiss National Bank abandoned the peg holding the Swiss franc below the Euro. The resulting chaos in the FX market drove the ES up to 2027.25. It then dropped to 1986 for a 41-point move … before the market had opened.

After the US session opened there was a weak attempt to push the futures back up, but it failed to hold the gain. And after the European market closed, US equities started to sell off into the close, making Thursday the 5th straight down day. The market is working its way through the nearby resistance and moving down.

The ES has now breached the 150-day moving average line and is moving toward the lower boundary of the long-term uptrend channel (green). The short time horizon has become oversold, but the intermediate term is still very far from an oversold condition. The final target for the daily range breakdown is around the 1950-55 zone, still some little way from current price. We expect to see the ES move lower.