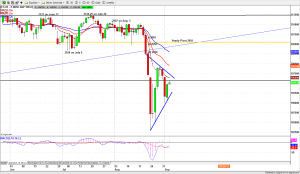 Later in the afternoon Wednesday the Beige Book was released and showed that few members favor hiking rates in September. The prospect of more free money encouraged buyers to push the price to the high end of the trading range for the close.

The market is moving into the pre-holiday bullish period. The pop shouldn’t be surprise traders. In Europe, the ECB may provide more liquidity to stimulate their economy, and that could help to hold the ES inside a big triangle pattern range.

The struggle going on during the regular hours trading is intense. After the Labor Day holiday, most of the traders are back at work. The closing price for June was 2054. The ES may go up there first before it resumes the move down to retest the August 24’s low.