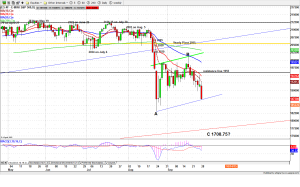 ES gapped down at open and sold off after the price failed to move above 1916.50 in early trading. Concerns about a rate hike directly contributed the current selling. When everyone expects this week should be bullish, it often produces unexpected results.

Now yesterday’s sell-off gives more evidence that the market needs to retest the August low at 1831. Traders will sell into any rally as long as ES doesn’t go above 1955 line.

There is a bearish pattern (A-B-C correction) in the intermediate-term. The B top has been confirmed. The C move began last Friday. The 1900 psychology support was broken yesterday and will become today’s major resistance line. On any bounce up to 1900, the next major selling will resume.

Today we may see a continuation low first. Any early bounce will be sold and fall back. However if the ES goes low first and later breaks out of the first regular hour trading range, we may see ES have an end-of-month bounce. That bounce, if it occurs, will not last very long. It is possible to see another sell-off next week as long as ES doesn’t close above 1900 this week.