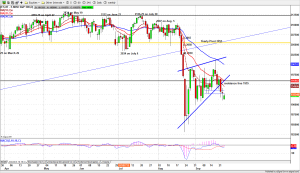 ES sold off in the early morning session and made a low at 1897.25 level. But later the price moved back up to anticipate Mrs. Yellen speech and tomorrow’s GDP report.

The end=of-quarter re-balance from fund companies selling (T+3) could be done today and the time is moving into the classic bullish end and beginning of the month period, which should start later today or next Monday. Some bounce activities could be seen for a while.

1925-30 will be today’s option meanlines today. Up to 1950 and down to 1900 will be the range where the Bulls and Bears fight for today’s option expiration. But as long as ES stays under 1930 line, the bears will have more hope to move the closing price under 1925.

Some bounce is expected. But we are focusing on the resistance level to go short..