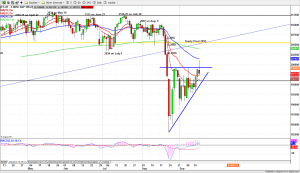 ES ran up strongly before the FOMC policy announcement, anticipating that the interest rate would not be increased this time. The price not only moved past the August 28 high at 1993.00, it made a high at 2011.75 – just below the 50-day moving average – during the Fed Chair’s press conference.

But after that initial excitement, traders began to “sell the news” and the market turned around and went south. After a big spike on heavy volume during the press conference, the ES gave back all of the gain and closed 10 points in the red. Classic pump and dump.

Today is the quadruple witching expiration day. The September contract will expire at the open.