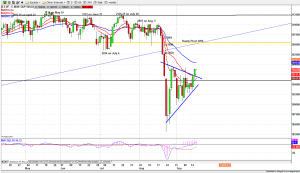 The ES broke the descending triangle pattern on the daily chart and made it quite clear the Bulls are in the driver’s seat, at least for now. The price action has been bullish for the past several days – up about 60 points in the last two days – and there is little doubt the market will try to move up to retest the several breakdown levels (2030-2050-2065) resting above the current price.

But this is quadruple witching expiration week, there is a bunch of economic reports being released, and the FOMC meeting might result in the first interest rate increase in nine years. The market may be misinterpreting the Fed’s intentions.

Today there is the FOMC minutes and the Fed Chair;s press conference in the afternoon. We don’t want to predict which direction ES will go after that. The algos can make anything happen in times of confusion.