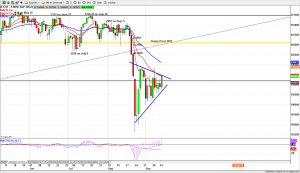 ES attempted to break its triangle pattern to the upside yesterday. Both the Retail Sales and Empire State Mfg reports were below expectations. But the poor results persuaded Wall Street that the Fed may postpone a rate hike, and triggered buying. It was enough to make the players forget – temporarily – that the Chinese market dropped another 100 points Tuesday. This week, only the Fed matters.

The FOMC meeting begins today. Before it begins there are lots of economic reports to be released in the pre-market session. The ES could continue to move up in the early sessions.

But traders also need to be prepared for the possibility that the ES may pull back sharply if there is a leak of information from Fed – or even a rumor of a leak. Any break of the support in the 1953-65.50 zone will cause a price reversal.