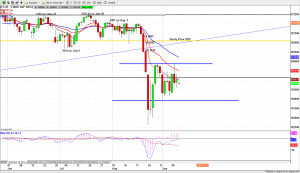 ES managed to hold above the 1934 line after the market opened for regular hours trading. It attempted to push the price above 1961 to regain control of the upside. Unfortunately it failed. At the end, it closed under the 1950 option battle line.

The rollover day passed, but the rollover activities will extend into today. About half the usual volume is still missing, and today we should see one extra day of fighting to see who takes control of the 1950 line.

1934 remains a key support for the ES. A failure to hold above it could lead the price lower toward 1900 very soon.