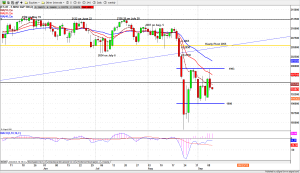 ES ran up 20 points in overnight trading and made a big gap at the open. But the price quickly faded right after the market opened, and moved lower step by step. By the close the ES not only lost all the gains made overnight, it also lost everything it gained in the prior day and closed below Tuesday’s low. It was a big reversal move and it showed that the Bears are back in force.

There was no follow-through yesterday. The Bears put their paws right on the newly-defined range top at 1992. The ES has also lost control of the 10-day moving average line again, and that brought aggressive trend traders back in on the selling side.

Today is rollover day. The September contract (ESU5) will expire next week and December contract (ESZ5) will be the front contract to trade tomorrow. Lots of volatility could be seen today. ES could have a continuation low movement and push back down to the low range at 1910-1900 zone for testing

Today’s low or tomorrow’s low should be the low for next week. 1935 will be today’s battle line for the options expiring tomorrow.