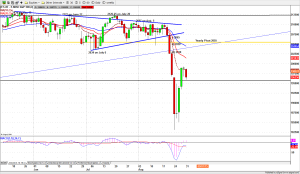 ES stalled its advance under the 10-day moving average line, which acts as a current resistance line, and closed down 20.50 points for the day and 129.25 points for the month, the biggest monthly loss in five years..

Fear of slow growth in China continues to haunt many investors. Now we are moving into September, which is not a favorable month. This week the market will be watching the jobs reports Wednesday and Friday, and hoping the Fed will back off the interest rate hike.

Today the 1961-59.25 zone will be very important for traders. A move below it could run buyers’ stops and push the price further down.

Chinese markets will not produce much in the way of bad news this week. There is an annual commemoration of the victory over Japan in WWII on September 3, with large-scale military parades. The markets will be a secondary consideration.

For the US market, we expect attention to be focused on the US economy – economic reports and the coming job reports. The market may just test the water again before the Fed makes its final decision on a September rate hike. Our strategy for today should be “short on the bounce.”