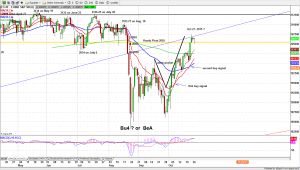 Today looked a lot like yesterday in the ES. The futures spent most of the day in negative territory but rallied in the afternoon to close just 1.75 points below the previous close. A second losing day, true, but still a minor loss.

After the market closed, Apple reported better than expected earning for the third quarter, mainly based on booming Iphone sales in China. Despite the results the stock – up 9% year-over-year, but down 6.9% from the 2015 high – stayed mainly unchanged or down slightly in after-market trading.

Today is FED policy announcement day. After two mild consolidation days, ES should be ready to have a strong intraday move. The Fed statement will have a big influence on the ES. Traders should watch to see which direction ES goes first after the announcement.