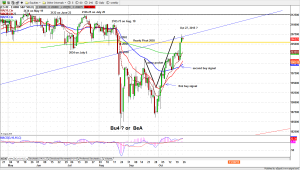 As we said in the Weekly Preview, the ES made a consolidation day Monday, moving back and forth within a narrow 8.50-point range, most of the time in negative territory. It closed with a loss of just 3.75 points, which was not very bad.

We may see another waiting day like Monday, but there is also the possibility for “leaks” anticipating the FOMC moves in advance of the policy announcement.

If there are leaks or rumors floating around today, ES could run up and wait at the high, and then “Sell the news” after the announcement is made Wednesday.

An alternative would be moving down to fill last Friday’s gap at 2053 or lower to 2030-20 zone for testing first , and then “Buy the news” and bounce back after the announcement.