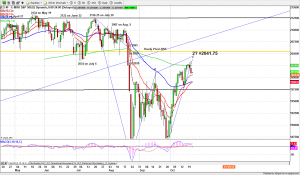 ES spent most of day in the green, but turned lower in late trading. It closed three points above the 10-day moving average line (2005.50). The price action at the close was bearish, with about 30 k contracts on the selling side.

Today the European Central Bank is holding a press conference. It could influence the price moves dramatically.

It looks like the ES could be ready to pull back. The 200-day moving average line remains the current resistance and if it holds the market down the momentum could turn to the downside.

2001.75 is the first support and as long as it holds up, we could continue see buyers coming in. But if it fails to hold, our traders should be cautious about long positions.

So far we still consider yesterday’s decline just a profit taking move. But that may change quickly if ES drops below 1982 – which we think is unlikely – and closes below it for the week.

If ES reaches the 1982 level, it is time to take this “SHORT TERM TOP IN” warning signal seriously.