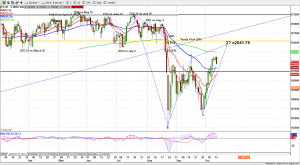 The ES gapped down at the open, an overnight reaction to bad market data from China and Europe, and comments from an IMF official suggesting the Fed should raise rates(!). After the open ES ran up to 2014 to fill the gap around 2011-2014.

But after Europe closed it was down for the rest of the day, and It closed below the overnight low. The price action was slightly bearish on closing.

We could see a further move down during overnight trading. But 50- and 10-day moving average lines are overlapping, which could act as today’s first major support line.

Corporate earning announcements – mainly disappointing so far — could have an out-sized influence on market move during the Q3 earning season. The market is still over-bought for the short term. Short on the bounce or buy on the dip may still be seen during regular session trading.