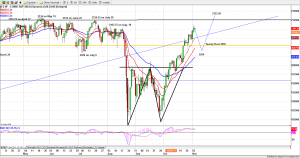 ES made a continuation high move yesterday. It not only broke through the 2100 level, it also almost made highs above 2103.75 , the level where the selling started on August 18. It indicates ES will not visit the 1850 level for rest of year.

Sentiment remains bullish. But the classic bullish period of end and beginning of month will end on Friday.We may see some brief pullback in the coming days or weeks, but eventually ES will move back up for the end of year.

Now there are lots of broken resistance levels that turn into support levels. First will be 2075, and then 2050, but the major one will be the 2035-25 zone. As long as ES doesn’t close below it, the tendency favors the upside. The full measurement for the double bottom pattern breakout will be at 2133.50; the extreme, extended upside target is 2192.50.

Today we may see a small pullback in the early sessions waiting for the ADP report. We also have four Fed members speaking. But we still will see “BUY on DIP” moves at the support areas.