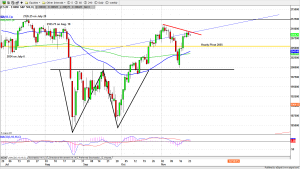 ES spent most of yesterday in the red. After the November option expired Friday, traders needed to balance their positions, and yesterday was the day. The price movement was very slow. The ES closed down 4.50 points at 2084.25.

Today we get the GDP report in the pre-market session. The report may move the ES a little in either direction – or both.

The key line will be the four-year uptrend line; the ES is currently trading below it. There is another short-term resistance line (red on the chart) which is a major key line at the 2095 area. Both resistance lines are overlapped.

As long as ES can’t move above those two lines, it will encourage the buyers to profit profits by exiting some of their positions.

But the support is also not too far away. The major support is the 2033-2014.50 zone. As long as ES doesn’t fall below it, seasonal buyers will move in and push ES back above 2055 level again.

Due to pre-holidays, the volume will be lighter than usual. Also the Thanksgiving week typically weaker than its prior week. However this is the favorable season for stocks, and the buyers will still be there.