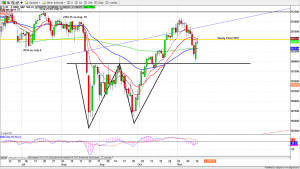 ES had a strong rally in early sessions as the street cheered for solid earning from Wal-Mart Stores and Home Depot. However oil remained low and GOLD tanked and broke its major support. The SP500 index was dragged down.

Later reports of a bomb threat in Germany sent price down further. At the end, the rally gave back all the gains; the ES only had a one-point gain from yesterday’s close.

Today the FOMC minutes will be released at 2pm. Everyone will be looking for a clue about the Fed’s plans for a rate hike, if any.

Any thing can happen in the current situation. The Street is nervous about political events and is reacting to uncertainty; on the other side the PPT will work to prevent the market from crashing.