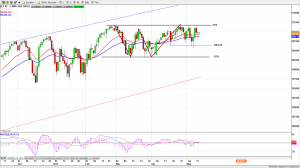 ES had a wild day. It dropped 18.50 points in the pre-market before the open, in response to a sell-off in German bonds. It settled down after the morning session and recovered 95% of the early loss by the close.

This was pretty much a bailout move. The news was just an excuse. The main purpose is to help last Thursday’s shorts move out of their positions without a major loss.

Today the Retail Sales report will be released before the market opens. If the Report is regarded as disappointing it may temporarily pull the ES back down near the 2084-86 area. But 2082.75 is a monthly pivot. Yesterday it held ES up well, and today we expect it will still hold up.