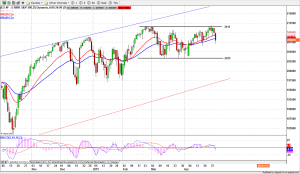 ES had a continuation low move yesterday. It not only broke below 2090.50-88.75, last year’s high which was acting as support zone, it also broke the short-term momentum support lines (20/40ema) and managed to close below them. The price action was bearish. It indicates the ES intends to form a short-term double top.

Today we need to see a follow-through on the downside move. A move below 2064.50 will give confirmation that a double top pattern is in process. A further decline should be expected.

Conversely a move above 2096.50 level and close above it will indicate that the bulls still has some energy left. However we should look for short side entry if ES has a testing bounce.

From now on, we should look for swing short positions. 2121.75-2123.50 is short-term major resistance zone. As long as ES stays under it, slowly grinding toward the downside should be expected.