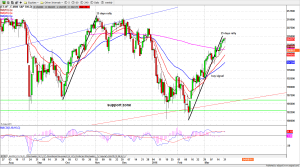 ES sold off overnight in reaction to the Brussels bombing, but quickly found support and moved back up within 30 minutes after the market opened. At the end, it closed flat.

Last October’s surge extended 25 days and made a high at the 2110 level. The current surge is now 27 days. ES advanced almost 12% both times. It is due for a pullback.

But long-term indicators are not in overbought territory. In addition the short-term PMO indicator is still bullish, and hasn’t given a sell signal yet.

A minor pullback can’t be avoided, but a big correction could be delayed until indicators in all time frames move into the extremely overbought area.