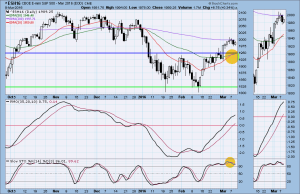 ES went sideways yesterday. It had the narrowest range day since Dec 24. It is in contraction mode and tried to hold the price up.

So far the slow stochastic indicator shows ES has extremely overbought condition in the short-term. The daily momentum indicator (20/50ema) gave a buying signal two days ago. The PMO indicator is decelerating somewhat. The indicators conflict with each other, and could lead ES to go nowhere.

For the other side, 1968.75 was a breakout level on March 1, the buyers likely will want to hold up ES at that level to fight back. ES could continue going both direction like yesterday’s behavior. We have begun to roll over into the June contract and the market will be hard to read for a couple of days.