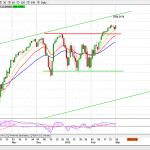 ES had a little profit-taking in the early sessions, but quickly found support at the 2100 level and moved up after the market opened. Later it just headed toward last week’s high area. Even though it didn’t reach 2117.75 (last week’s high) yesterday, it could see it today.

Today we need to see a follow-through from yesterday’s rally. The volume needs to increase in order to support the attempt to make new highs. Based on the price action on yesterday’s move, ES should go higher to test 2117.75 at least.

2100-98.50 is the first major support zone. As long as this support zone holds up, the price will grind slowly up to towards the long-term resistance line (green).