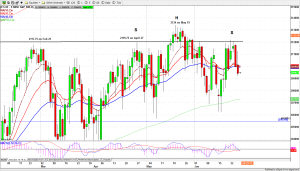 ES had a continuation move down yesterday, just as we predicted. It tried to hold up in the early morning session, but sold off in the later sessions. It is possible that selling was connected to today’s canceled EU summit and the new German demand to reach a solution before the markets open Monday.

From a technical perspective, a potential short-term double bottom bullish pattern failed, and instead we are looking at an intermediate-term bearish H&S pattern. (See chart; click to enlarge). Now as long as ES doesn’t close above 2100 level, the short-term trend should be down and toward the 135-day moving average line.

Today in the early session ES may drop further toward the unfilled gap at 2089.25, or lower to the 2080-75 area. If ES does go this way, we should expect a bounce from that low later.

2098-2100 is the first resistance zone. Price may fake a move higher to run stops, but our traders still should focus on the short side.