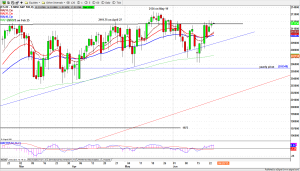 ES cooled down a bit by going sideways. It formed a narrow trading range yesterday. Traders weighed an improving situation in Greece. At the same time, the street also digested a mixed round of economic data – a declining durable goods order and an increasing new home sales.

Today’s ES movement will be influenced by the Eurogroup meeting to decide on the latest Greek debt proposal. The price could rally further first and reverse the following day. Alternatively the ES can also “sell the news” first before price bounces back in later trading hours.

Here’s the link to the full trading plan with the buy/sell numbers: 150624-plan

2122-23.50 is a key zone we need to watch carefully. A move above it could trigger ultra-short-term momentum and push the price up to 2135-39 zone to shake out weak shorts. Holding below that zone could lead the price back down to retest 2107-05 zone or lower toward 2100-95 if the selling is strong. It could be a whipsaw day with conflicting rumors or a strong trend if there is definitive news. The first 30-minute range should tell us the direction.