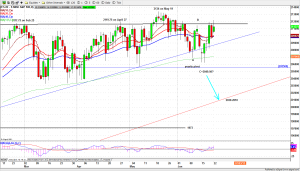 ES gapped up strong after news from Europe that Greece had submitted a new debt proposal the creditors found “encouraging.” No details, and no official response, just a press conference, but hope was enough to float all the markets during the early part of the day.

Today ES will likely wait for confirmation from the Euro group that the Greek proposal is accepted —  or not. Having bought the rumor, we’re expecting the market to sell the news if/when a final settlement is made. Otherwise ES could go sideways within yesterday’s range to wait for more definitive news.

Here’s the link to the full trading plan with the buy/sell numbers: 150623-plan

2122-23.50 is the neckline of a short-term double bottom pattern, it also is the intermediate-term resistance line holding the market down since February. A move above 2126.50 line could push ES back up the May high area 2135-36.50. A failure to break through the resistance could prompt the ES to pull back into the 2100 area to retest the 20/40ema lines.