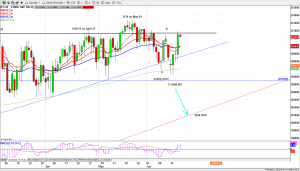 Now 2062 is a short-term low and could be this month’s low. But ES still has to make a decision which pattern it wants to follow next. Based on daily chart, there is longer time-frame pattern which could be a potential H&S pattern with two shoulders’ top near 2119.75-20.50 zone.

There is a shorter-time period pattern which is a double bottom pattern with neckline also is lying at 2120.50 area.

Based on volume and price action, ES is bullish. But the movement is in a quadruple witch expiration period, which may be disrupting the real move.