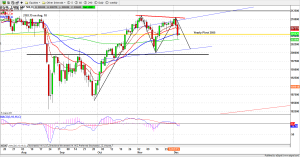 Yesterday the ES followed the German market down after the ECB press conference disappointed European traders expecting a increase in QE and a bigger decrease in interest rates.

In the afternoon sessions, the growing perception that the San Bernadino killings were a terrorist attack sent the ES lower through the 40-day ema line and through the opening price for the year (2055) The price action was bearish. The volume was stronger on the selling side.

Today all eyes will be on the non-farm payroll report before the market opens. Traders are looking for something that will confirm or deny the Fed talk about a rate increase in December. The current consensus is that the Fed will raise, but the consensus has been wrong before – as it was in Europe yesterday.

In technical terms, yesterday’s selling confirmed that 2105 is the short-term top. We may see a small brief bounce or a sideways movement to consolidate yesterday’s selling. The major resistance zone will be 2075-2078.50. ES needs to stay under this zone for a further decline next week.