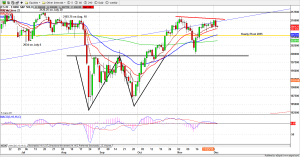 ES dropped 18.50 points yesterday, erasing most of the prior day’s gains. It not only lost control of the four-year uptrend line, it also formed a bearish engulfing candle on the daily chart.

Later in the afternoon selling accelerated on news of the shooting in California. It does not appear to be a foreign terrorist attack, which means it will be quickly forgotten and the ES could recover some of the loss today. But the strong afternoon selling did some damage in the ultra-short-term.

We have seen similar moves several times since May: a breakout above a key resistance level and a close above it on Day 1, followed on Day 2 by a retracement and a close below the Day 1 low. This could be the same move again. It indicates that the former resistance level is stronger than we expected.

Today 2085.50-89.50 area will be the first zone to watch. It should be the first major resistance. As long as ES stays below it, the price still can go down further.

2065.50 was last week’s Sunday night level, and so far the ES still hasn’t offered a chance for the sellers at that level to bail out. The ES is likely to go toward that destination if the price stays under 2085.50.