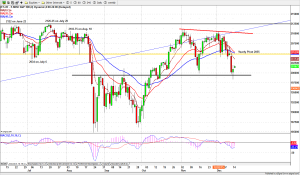 ES sold off in the morning sessions after Draghi spoke at 7 am eastern time. ES moved below the 1992-1990.50 zone first before it managed to regain some ground in the afternoon. At the close, some shorts covering and continuing movement into the new contract pushed the ES backed up into the green.

Today we may see a further rally in the early sessions. But the 10-day moving average line will act as the first momentum resistance area at 2035.50, with 20/40ema lines still above it. Before the FOMC policy announcement, we are likely to see profit taking or protective exits on both sides. A failure to push the price above the 10ema line indicates that the Bears still are in charge.

The 1996.50-95.50 zone becomes today’s key zone. As long as this zone holds ES up during overnight trading, odds likely favor to push price back up higher to close the gap in the rollover contracts in the 2048.50 area. A break below this zone indicates the declining is not over and a further drop to toward 1975-65 should still be expected.
Short-term === Bearish
MEDIUM TERM === Neutral
LONG-TERM === Bullish